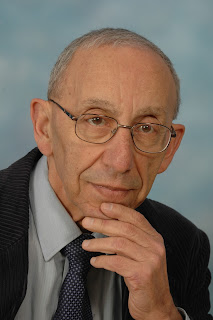 Dr. Shlomo Breznitz was born in Czechoslovakia. During the Holocaust period he and his sister were saved by Catholic nuns. His mother survived the camps, but his father, uncles, aunts, nephews and grandparents were all killed.

Shortly after the birth of Israel he moved there and stayed on a kibbutz. His Ph.D. in psychology is from the Hebrew University, where he became a faculty until 1974.

He then moved to the University of Haifa where he became a full professor. He was elected to be the President and Rector of the university and later established the Center for Stress Research, which he directed until his retirement.

His research focuses on coping with stress, with particular emphasis on issues of denial and hope. He became an internationally known scholar in these areas and was invited to spend significant time at such leading institutions as: UC Berkeley, Stanford, National Institutes of Health, and Rockefeller University.

He has published seven books, including an autobiography, "Memory Fields" dealing with his childhood during the Holocaust. The other books, as well as numerous scientific articles deal with issues of stress and cognition.

In 1999, just before retiring, he established CogniFit, a company dedicated to developing scientifically validated computer software for enhancing cognition. The company won numerous awards, including one by the American Society for Aging.

In 2006 he was asked by Ehud Olmert, the Israeli Prime Minister to join the Knesset, where he served for two years.

His most recent book, "Maximum Brainpower: Challenging the brain for Health and Wisdom" appeared by Ballantine Press at the end of June.